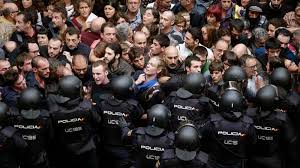 Many things have happened in Catalonia since my previous article that ended with a reference to the referendum on independence held on October 1. The situation is confusing, the international media do not explain exactly what is happening. In this article my intention is simply to clarify the situation and warn of what can happen from now on to the elections on December 21st.

The (non) Declaration of Independence.
The Catalan government led by Puigdemont promised to declare independence at 48 hours if the referendum had an affirmative result. The referendum had it, and at 48 hours nothing happened.
Days later the Spanish Government announced the approval of the Article 155 of the Spanish Constitution, by which, among other things, the Catalan Parliament would be without any functions. The deadline for the entry into force of article 155 began on October 28.

And he did so, and he did it to proclaim the independence of the Catalan Republic, something that was celebrated in the streets of Barcelona and what the international press talked about, but which - simply - was not true! The party approved and formed by Parliament did not include any reference to independence, and only spoke of "developing the result" of the referendum, the word independence appeared in an attached prologue that was not voted on or approved and therefore has no legal effect. In other words, there was no declaration of independence. After the celebrations in Catalonia, there was a certain feeling of disappointment.

Article 155
On October 28 Mariano Rajoy, signaled the entry into force of article 155 and the call for elections for next December 21, the call was made at an early date (the 155 gave him up to 6 months) to avoid the feeling of " occupation "Spanish of Catalonia. Given this situation, the independence parties had two options: not to recognize the elections and not to present themselves, which would leave them out of the next Catalan parliament; or recognize them -which implies admitting that there is no independence but "Spanish legality" - and try to win them: they chose the second option.

To this situation it is added that the Spanish Justice has imprisoned the two presidents of civil associations defending independence, and a part of the Catalan government; the other part is in Belgium from where Puigdemont proclaims himself very unrealistically "president in exile".
On November 9, the president of the Catalan Parliament that "declared" independence, assumed in the Spanish court that the declaration was "symbolic "and that she accepted the Spanish Constitution, and in this sense in which the former members in prison have appealed to the Spanish Tribunals, to get their freedom.

An attitude that reduces much credibility to the creditibily of Catalan politicians.

In these moments the questions that are posed are

What will the independence parties promise to their voters this time?

Will this promise be enough to mobilize your electorate?

Who will win the elections?

If pro-independence parties win, how will Spain react?

Can there be different post-electoral coalitions?

The answers will arrive at the end of the year.